Players will undertake a series of mental and physical challenges in this exciting one-hour game.

Duration of game:
One hour

Games have been created by 'Adventure Out! Games'.

Visit the Adventure Out Games website to to find out more about the game and to book your tickets.

Help Roman Emperor, Septimius Severus, choose which of his two sons will succeed him. Players will undertake a series of mental and physical challenges in this exciting one-hour game: which team -  and which brother - will be victorious?

Game in Detail
It’s AD 208 and the country is part of the Roman Empire. The current Emperor, Lucius Septimius Severus, is at Arbeia, the northernmost frontier of the Roman Empire. At 63 years of age, it is time for him to announce his successor – but which of his two sons, Geta and Caracalla, should he choose?

The solution is a competition organised by his wife, Julia Domna, to prove who is most worthy. You will battle it out in a series of mental and physical tasks on behalf of either Geta or Caracalla – including an exciting team tug of war, a clever catapult game and a water puzzle challenge in addition to scouring the grounds for fun, cryptic clues!
But there is a twist. Both brothers are deceitful and untrustworthy and refuse to play by the rules; they will stop at nothing to succeed. Players must be on the lookout at all times if they are to win…

Note: this game will be run with two teams. If only one team is playing, you will compete against the previous team. 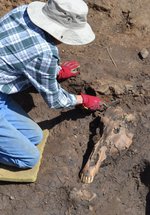 Flesh on the Bones